The M1 Mac Mini May Be All the Mac You Need 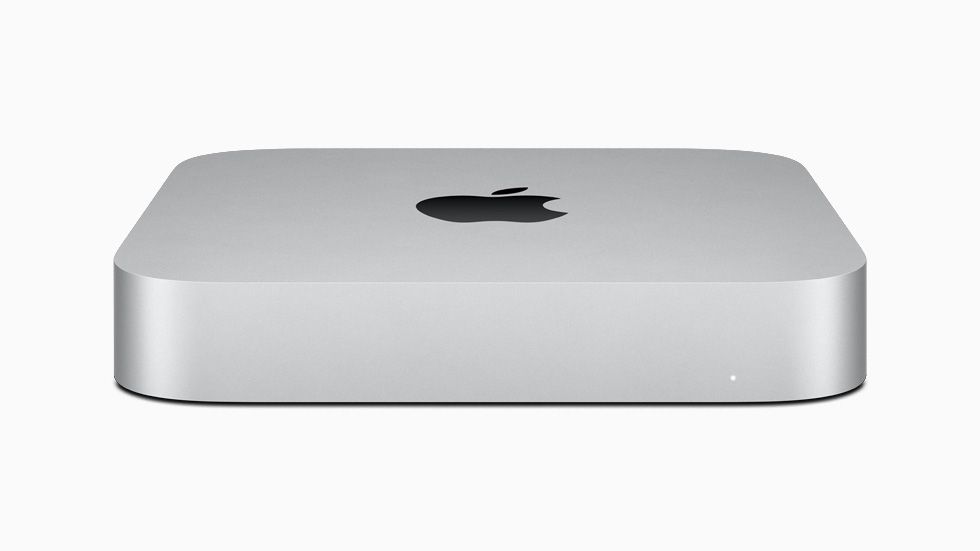 Apple’s is a pocket powerhouse. It’s the cheapest M1 Mac, and also the most capable, even in its most basic configuration. But, unlike most claims from early reviews, it’s not impossible to overload it. In fact, it’s surprisingly easy. Still, this is the most incredible desktop Mac ever made.

Today we’re talking about the Apple Silicon M1 Mac mini with 512GB storage and 8GB RAM. There are plenty of benchmarks and out there already, so we’ll look at the M1 mini in everyday use, and, specifically, how to bring it to its knees.

This thing is f-a-s-t. I’m coming from a vintage 2010 iMac (with added SSD), but my other everyday computer is an iPad Pro. The M1 Macs are snappy. Click to launch an app, and it’s there; not quite as quick as the iPad, but the iPad also employs some tricks to seem faster, like launching to a screenshot of the app while the app gets itself ready.

Likewise, moving around is slick. Switching windows, switching apps, and using menus are all instant. The M1-powered Macs feel completely different, like a new kind of computer.

They’re also cool. The mini’s chips are housed in a roomy box with a fan, but reports say the MacBooks are equally cool. I haven’t heard the fan on mine yet, and it has never gotten above slightly warm to the touch. It’s just like an iPad, which never really warms up in regular use. 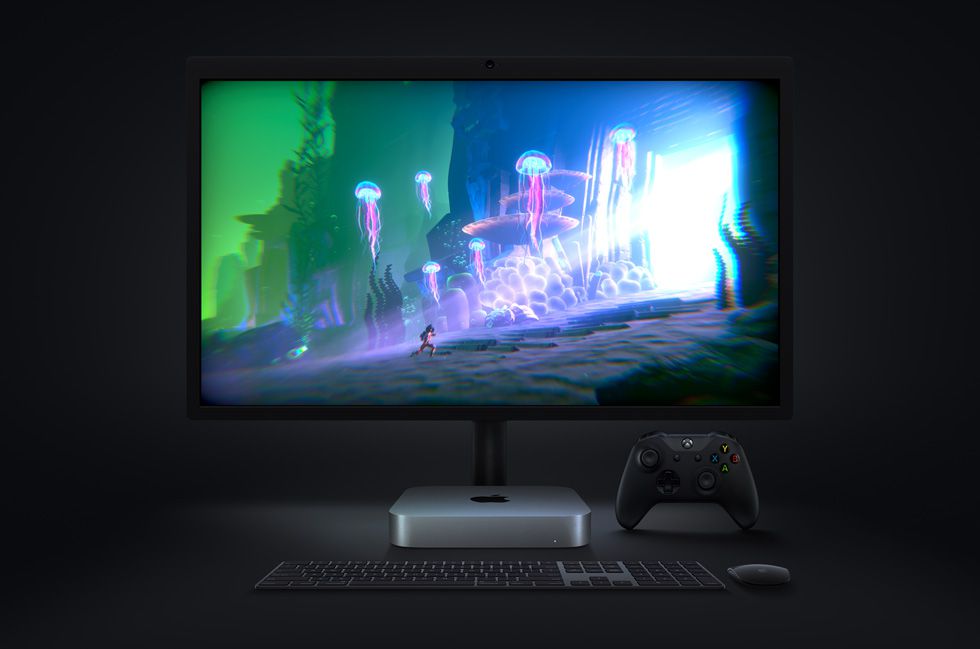 One of the M1 Mac’s coolest abilities is lost on the mini, though: iPhone-like instant wake. The computer does wake instantly, but because it’s connected to a third-party monitor, you have to wait for the monitor to get going. Perhaps Apple’s , but I’m not paying $5K to find out.

One more note on speed. Apps have to be updated to run natively on Apple’s M1 chips. In principle, it’s similar to how an Android app can’t run on an iPhone. To help the transition, Apple has made Rosetta 2, a tool that translates old Intel apps to run on the new Macs. The first time you use it, macOS downloads Rosetta. Then, whenever you download an Intel app, it translates it. The result is a performance hit compared to native apps, but it’s small. I’ve run Adobe Lightroom just fine, and also Ableton Live. These are complex apps, and they just work.

Reviews of the M1 Macs all say these machines are incredibly capable, despite being Apple’s “low-end” computers. They list tests with 50 open browser tabs, Final Cut 4K video editing, and more, simultaneously. But the machines can be brought to their knees. I fired up Logic Pro, along with Lightroom Classic and iMovie (playing back a project). Everything remained just as fast as ever, but when I started flipping between images in Lightroom, Logic gave up. I saw this error: 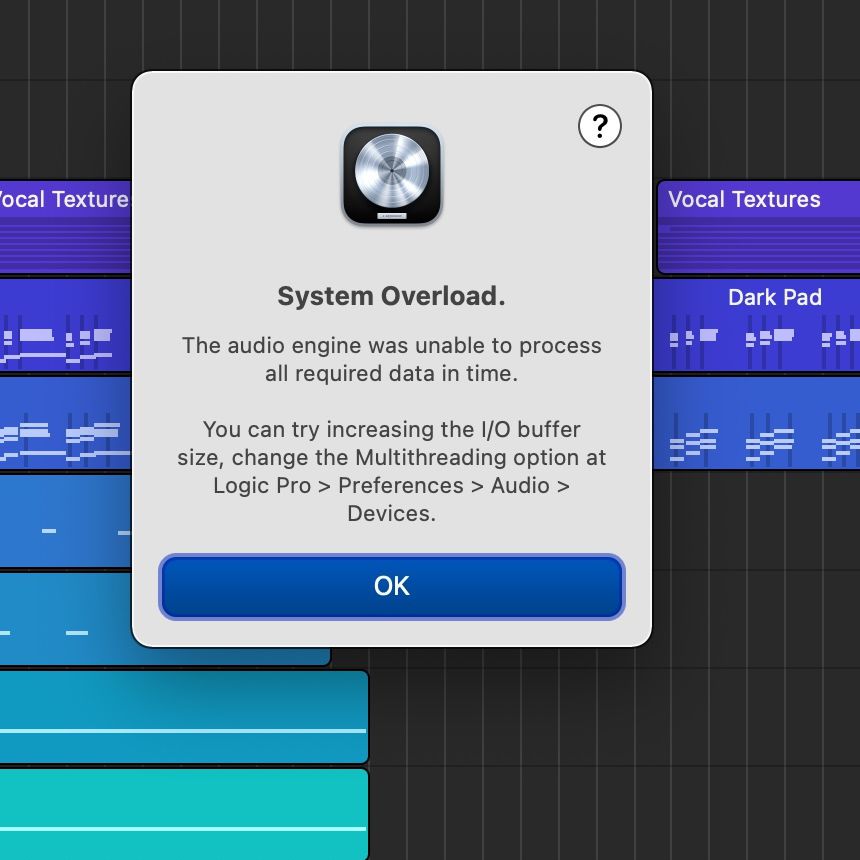 Further testing showed that this was a CPU spike, not a problem with RAM or disk access. Maybe it was because Lightroom was running under Rosetta? I quit it, and used instead, which is fully compatible with Apple Silicon. I had the same problem. Whenever I upsized an image using its Super Resolution tool, I could spike the CPU and break Logic.

So, it is possible to cause trouble. Then again, it’s unlikely that you’d ever do this test in real life. One more note: 8GB RAM doesn’t seem to slow things down, but when I check RAM usage with the Mac’s Activity Monitor app, it shows that I’m already using “swap” memory. This is when the computer runs out of regular fast RAM and borrows a bit of the slower SSD storage instead. So, 8GB RAM seems like enough, but if you think you need 16GB, you probably still do.

The mini can also run iPhone and iPad apps, natively. Not all iOS apps are available, because developers can opt out, and rightly so. Some apps fail to launch, others don’t translate to the Mac very well, but some work great. Podcast player app Castro, for example, even responds to the media keys on the Mac’s keyboard. It’s not a perfect solution, but it can be great when it works.

The M1 Mac mini is $100 cheaper than the old base Intel model, but it’s down to two Thunderbolt ports instead of four. If you use one of those Thunderbolt/USB4 ports for your monitor, you’re down to just one. That probably means you’ll want a Thunderbolt dock, and those are all around $250.

Also, with the M1, the RAM is on the chip, so you can’t upgrade it later. Nor can you swap out an old SSD for a new one. You have to treat this box like an iPhone—you get what you buy, and that’s it. It’s a shame, because the mini was always a great enthusiast’s computer, but that’s the price of something so small and powerful.

Should You Buy One?

If you need a new MacBook Air or Pro, or want an entry-level Mac mini, then these are all better than their predecessors. You should go ahead and buy one. If you’re planning to upgrade from a recent machine, it might still be a good bet, due to the battery life in the laptops, and the quiet, silent running.

But if you need a pro-level desktop machine that you can really push, you might want to wait. The hardware is fantastic, but the real pro-level stuff has yet to arrive. And don’t forget, this Mac mini only runs macOS Big Sur, which not all apps yet support.

And as an upgrade from a decade-old iMac? It’s simply incredible.