Google’s New Pixel 5 and 4A 5G are Nearly Twins

If you were to hold Google’s new Pixel 5 next to the 4a 5G model you’d be hard-pressed to tell which was which.

The two phones look nearly identical and don’t differ much on the inside either. They both have an extra wide-angle camera and run Android 11. The $699 Pixel 5 does have a few more features going for it including more RAM, a slightly larger battery, and wireless charging. But the 4a is no slouch and costs less at $499.

There’s a lot to like with both phones. They both sport the distinctive Pixel design that sets the standard for elegant minimalism. And they offer Google’s pure Android experience stripped free of the bloatware that burdens handsets by many other manufacturers.

For those who want more features, the Pixel 5 is the one to get. It’s got a 6-inch, 2340×1080, 90Hz OLED display. This resolution and refresh rate should be fine for most users but keep in mind that some manufacturers are offering phones with even higher 120hz rates which could make for a better scrolling and video-watching experience.

Both of the new Pixels are relative bargains compared to the competition. At less than $700, the 5 is a relatively reasonable price with a decent feature set that fits the downbeat economic mood of this pandemic era. If you’re considering whether to buy the Pixel or Apple’s $799 iPhone 12, the 5 offers a higher refresh rate screen as the 12 only clocks in at 60hz compared to the Pixel’s 90Hz.

The iPhone 12 is a bit bigger, with a 6.1-inch screen compared to the Pixel 5’s 6-inch display. The iPhone is technically meatier at 5.78 ounces to the Pixel 5’s 5.33 ounces. But these differences are so small that they shouldn’t matter in real life.

I played around with the Pixel 5 recently and briefly was tempted by its terrific screen and super sharp cameras. The aluminum frame also feels great. Then, I was brought back to reality by the fact that I’m already tied into Apple’s ecosystem. 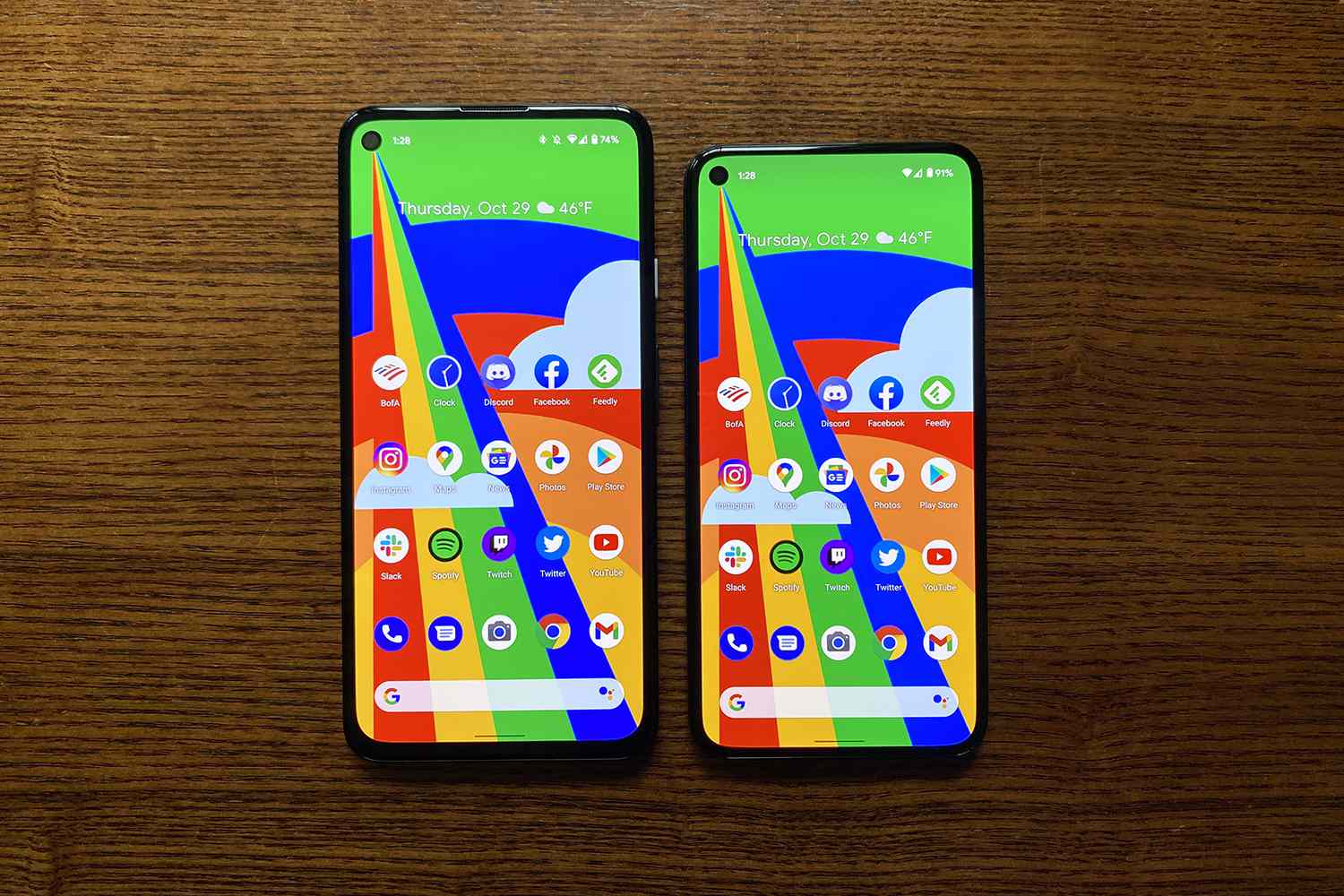 Both phones felt snappy and responsive switching between apps when I handled them. For the 5 and the 4a 5G, Google chose Qualcomm’s Snapdragon 765G which is in the mid-tier in terms of performance. Google claims the 4a and the 5 have up to 48 hours of battery life in “extreme battery saver mode” but that’s not for watching lots of videos.

A Bargain with a Plastic Frame

At $200 cheaper than the 5, the 4a saves quite a bit of cash while still offering decent specs and the security of the Google brand name. I was able to handle a Pixel 4a recently and was impressed with what I saw.

Even though the internals don’t compare with the Pixel 5 or flagship models by other brands the 4 should leave most people satisfied if they don’t demand the latest gizmos. This doesn’t feel like a budget phone even though it’s got a plastic body.

Photographers should be satisfied with the 4a’s optics. Like the 5, the Pixel 4a sports both a 12-megapixel standard wide lens camera and a 16-megapixel ultrawide camera. Both cameras produced stunning pictures in the short time I was able to use them with great clarity and detail even indoors.

On the video front, both phones use a cross between optical and electronic image stabilization. Google has released different types of optimizations you can choose for stabilization. I tried out the Cinematic Pan which gives a smooth, dramatic flair.

Google has released two solid phones and if you don’t need extras like water resistance, an aluminum body, or reverse wireless charging the 4a is a bargain. For those who want a few more features, the 5 has you covered for not a lot of extra cash.