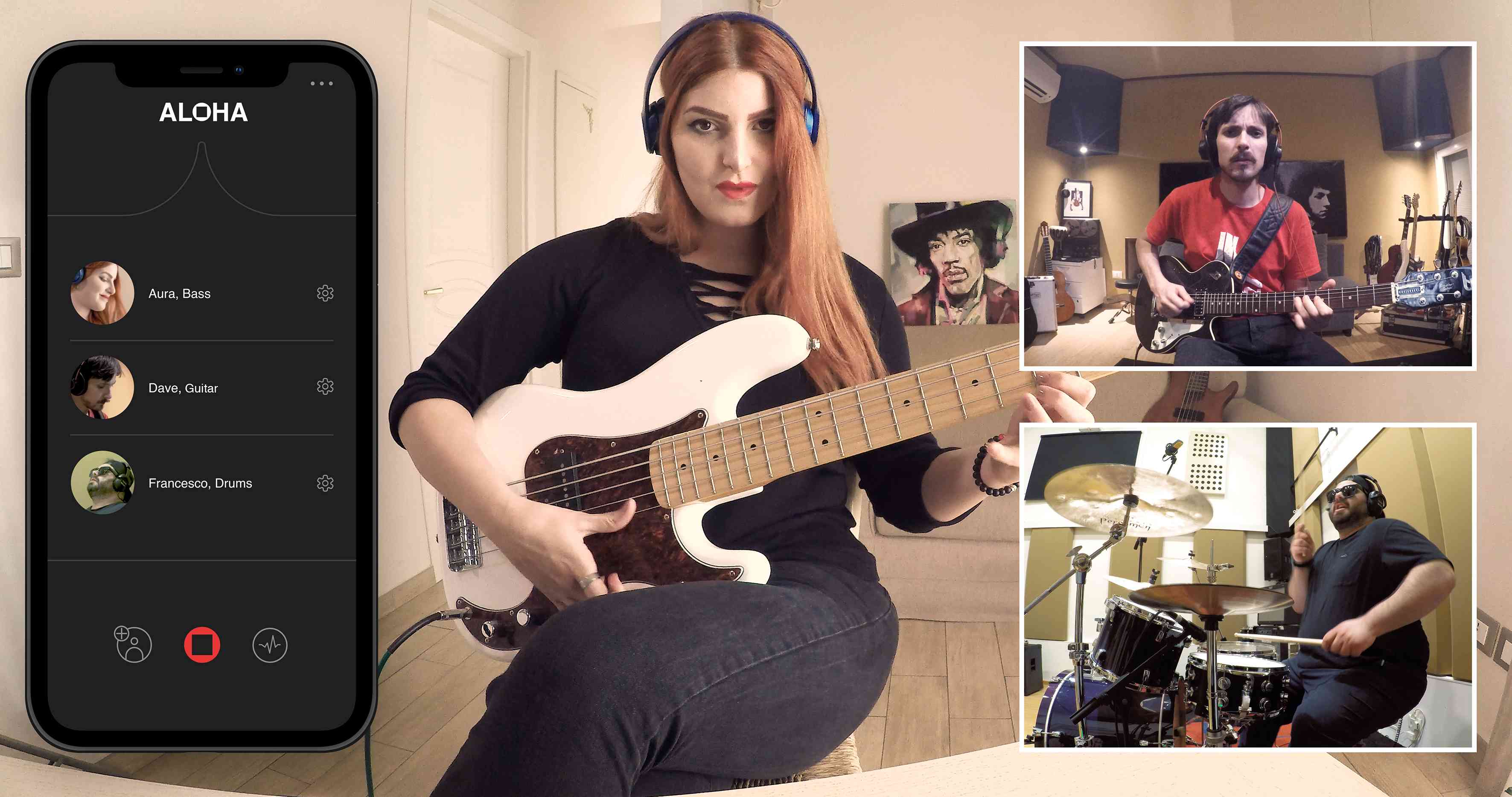 A newly released YouTube video aims to show the potential of a soon-to-be-released gadget called Aloha to create better online jam sessions. The device allows for video and audio collaborations online between musicians by managing and reducing audio latency.

Last week, the company released music by artists Little, Sharooz Raoofi, and Tom Varrall, who experimented with Aloha while in different locations across London. Aloha joins a growing number of products that allow musicians and amateurs to collaborate online. It’s a niche market that’s growing as musicians are forced to stay home because of the pandemic.

“Aloha is not going to replace being in a room with someone,” Simon Little, one of the musicians who produced the recorded session remotely, said in a telephone interview. “But it opens up a new kind of collaboration if two people simply can’t travel to be together.”

Aloha claims to reduce the audio lag between computers over the internet. The problem with collaborating via typical video services for musicians is “there’s too much of a lag” between the time a sound is produced by one participant and heard by another, Elk Audio CEO Michele Benincaso said in a video interview. The lag isn’t very noticeable during conversations, like over Zoom, but it makes music collaboration difficult.

“The pandemic has profoundly impacted the music industry, throwing the live creative collaboration aspect of it into crisis.”

According to Oxford University’s Faculty of Music, “the perceptual threshold to hear a delay” is around 25 milliseconds.

“Latency caused by transmitting audio over the internet can get in the way of achieving coordination with other musicians in real-time,” according to an article posted by Abbey Road Studios, the spot where The Beatles and many other artists recorded their masterpieces. “While there are premium hardware-based solutions that can power real-time jamming and recording, as of yet, we’ve not found a solution that has a sufficiently low latency of 20 milliseconds or less to allow more casual users to do so.”

Overcoming this latency is “a problem that every musician has been trying to solve during the lockdown,” said Little. “It’s extremely difficult to work together if the timing is off even a little bit.”

Solutions to reduce latency when musicians are collaborating aren’t new, but they tend to be finicky and expensive. Cleanfeed also claims to produce high-quality audio over the internet with low latency, although it’s not aimed at musicians. SessionLinkPRO is browser-based audio recording software that works through broadband internet connections and also claims to produce low latency.

Elk’s device aims to be user-friendly with a pocket-size device that plugs into an instrument and a standard router. A companion app provides video chat, audio controls, and the option to live stream. Aloha is expected to be released commercially next year and as a software beta within the next few weeks. No price has been set.

Benincaso described the Aloha device as “an audio interface” which “converts the audio into code and sends it over the network as a real-time stream of uncompressed audio that goes peer to peer, making it incredibly efficient.” He said that Aloha will work over any “decent, fast connection” and that the company is working to optimize the device for 5G networks. 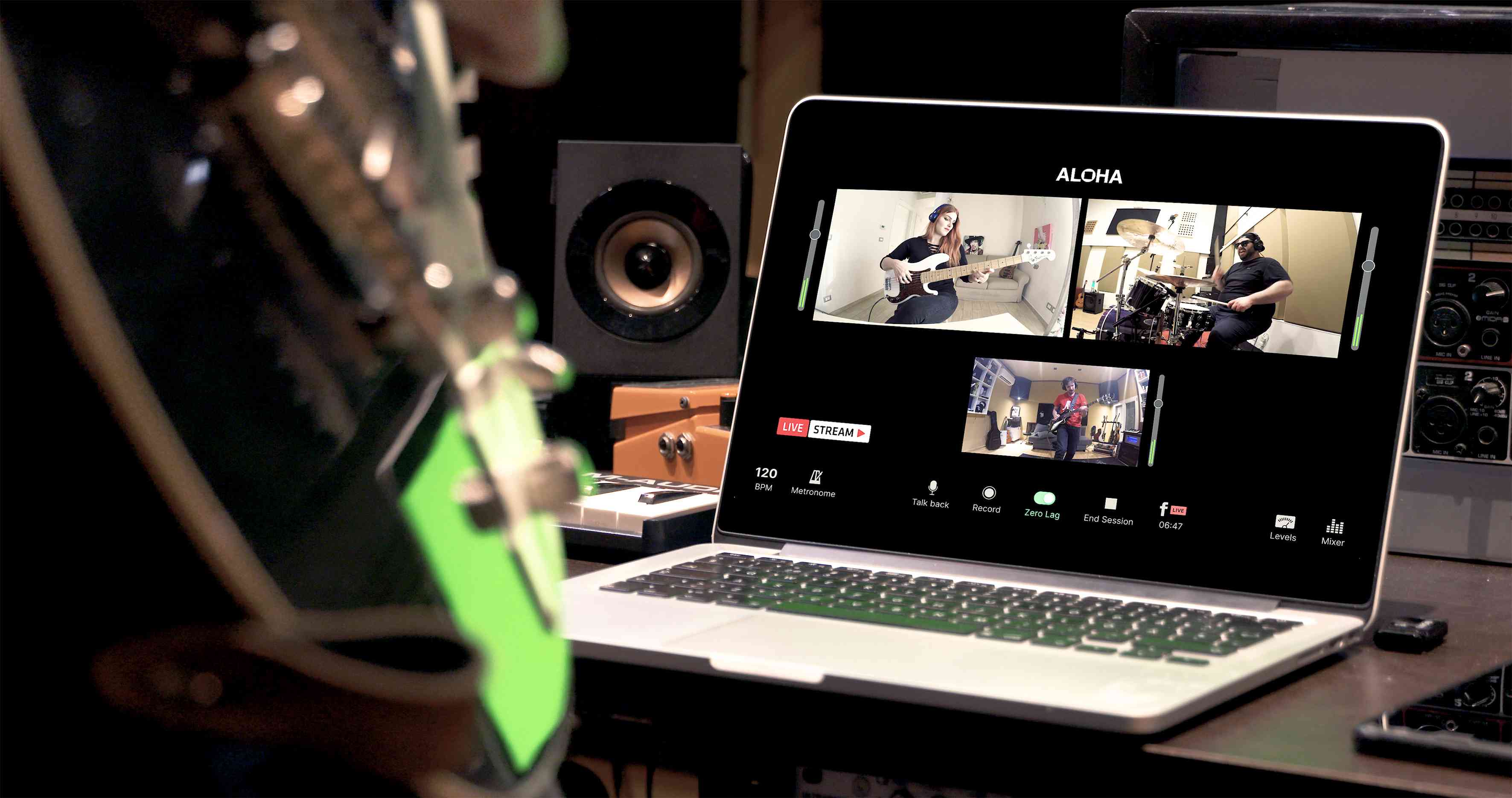 Increasing interest in Aloha is driven by the social distancing measures put in place for coronavirus, according to Benincaso. “The pandemic has profoundly impacted the music industry, throwing the live creative collaboration aspect of it into crisis,” he said. “Aloha can help artists overcome the social distance hurdles and once again practice, perform, record, and share with the world their creativity.”

Elk is working to provide schools with Aloha devices, too. “If you cannot play with teachers it doesn’t really work,” he said. “A lot of people talk about using Zoom, but that’s not really interacting with teachers. It’s more like watching a Youtube video.”

Little said he was initially skeptical that Aloha would work, explaining he’s “tried quite a few technologies that aim to bring musicians together and they didn’t pan out.” But Aloha turned out to be different, he said, because of its speed and ease of use.

Despite the advances promised by Aloha, musicians say it was unlikely to completely replace live sessions. “The disadvantages are obvious,” Raoofi said in a phone interview. “When you are in a room together, you can collaborate in a different way with visual cues.”

Producing music together remotely does offer one unexpected advantage, Little said. “[At least] there’s no embarrassment or sense of people judging you.”