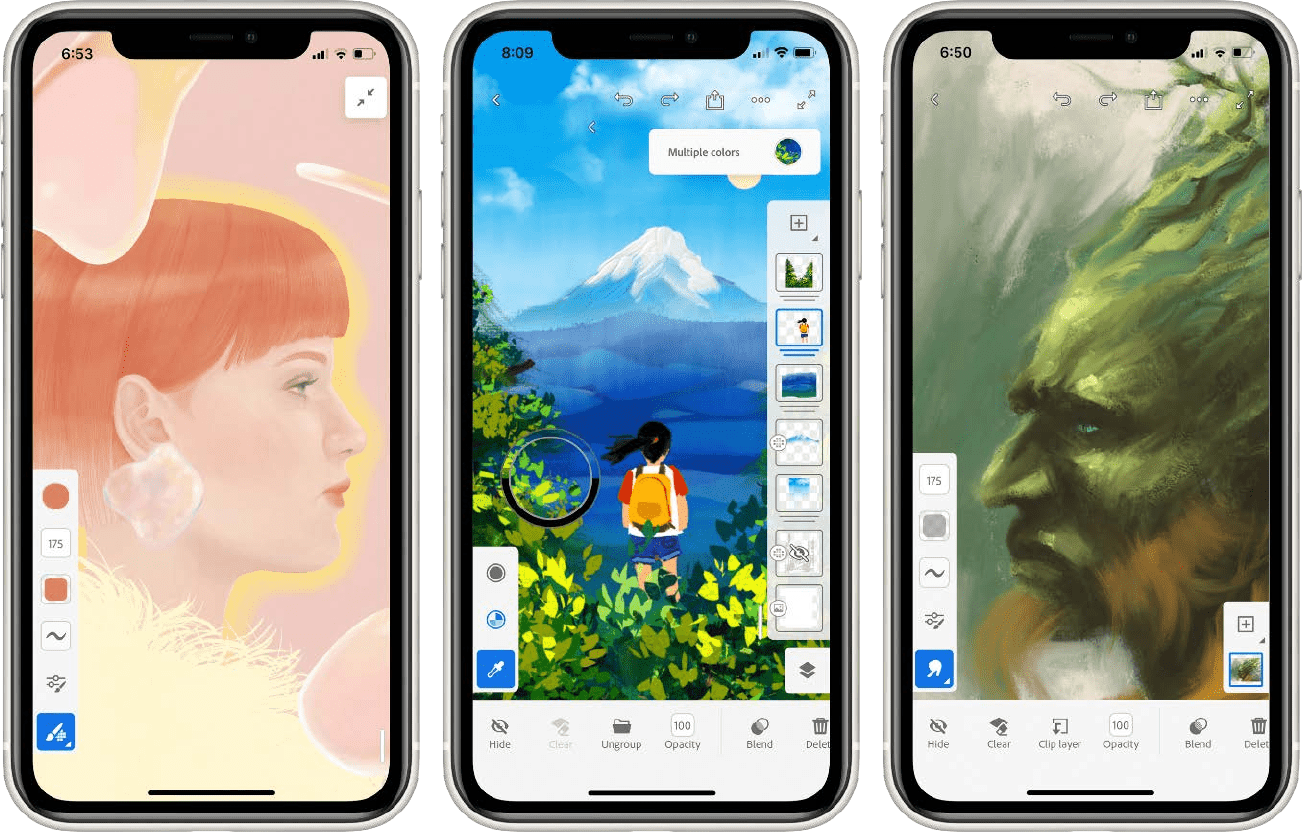 If you want to paint on your iPad or iPhone, Adobe Fresco offers an uncannily realistic experience. It’s also—like Adobe’s great Lightroom for iPad—really easy to use.

Fresco recently came out on the iPhone, and Lifewire spoke to Adobe’s Bryan O’Neil Hughes and Kyle Webster via video chat to find out more about the app and about painting on a glass screen.

“We believe that the iPad is the best place to do drawing and painting,” said O’Neil Hughes, “but it’s not the device you have with you every minute of the day. That’s the phone.”

“Painting” on a screen is an odd experience for anyone used to actual oil, acrylic, or watercolor. For a start, there’s no texture or feedback. The canvas doesn’t yield, and scrubbing oil with a stubby, worn hogs-hair brush feels the same as letting watercolor flow from smooth sable. But more importantly, a painting on canvas or paper reflects light, whereas a painting on an iPad emits light.

British painter and photographer David Hockney, who is used to exploiting new technology (he has even used a fax machine to create pictures), was an early adopter of virtual paint apps.

“It’s a very new medium,” he said in an interview during a 2013 exhibition.

“On the iPad I can catch the light very quickly,” he more recently told The Spectator magazine in April, “much faster than watercolor.”

When you first launch Fresco, a pencil is already selected, so you can just start drawing. The feel is uncannily fast, and there isn’t much lag between the Apple Pencil and the line on screen. The app uses Apple’s Metal graphics framework, resulting in a latency similar to that of Apple’s own Notes app, which is the champion in this regard.

We won’t get deep into features, but there are a few things worth nothing. One is that you can load an endless number of custom brushes, which you can create in Photoshop, then just sync across. You can also open any of your Fresco paintings or Sketches in Photoshop, edit them, then “round-trip” them back to Fresco, with the new Photoshop edits included. If something from one app isn’t compatible with the other, it will be frozen, but still visible, until you switch back. 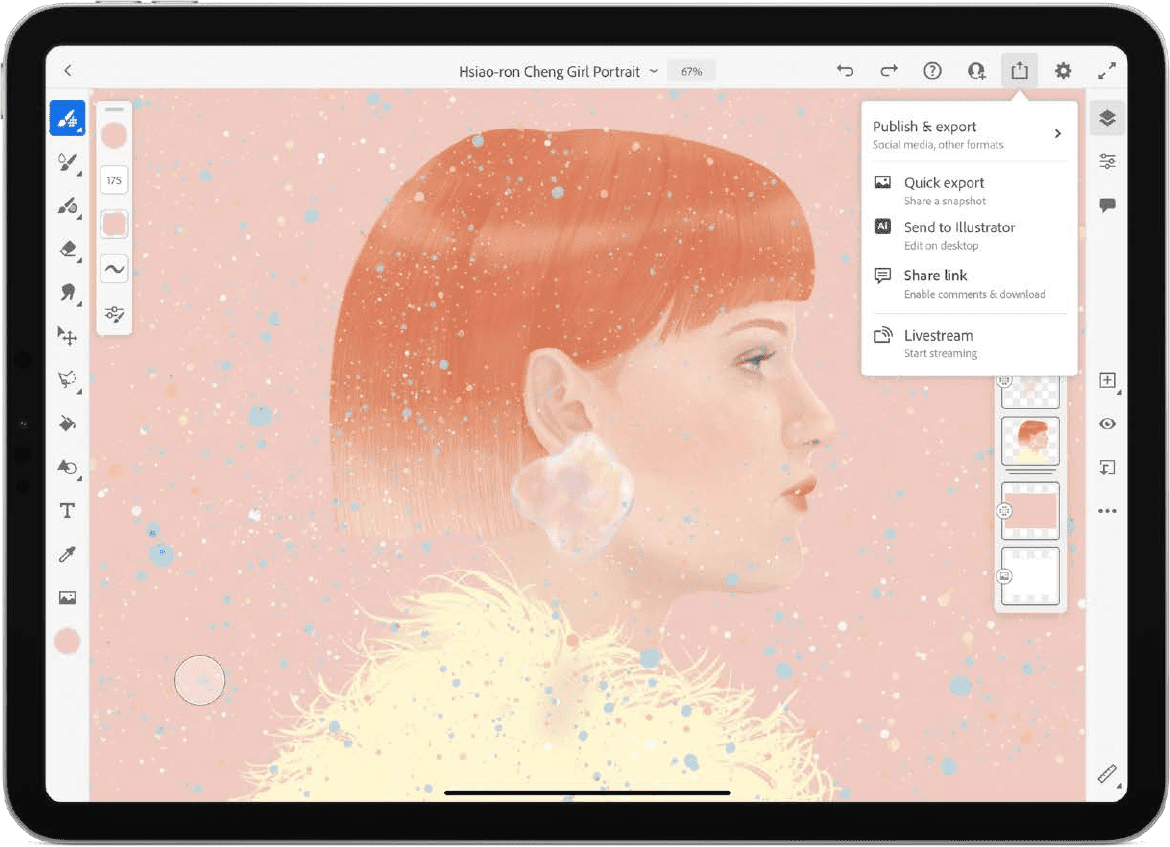 Another is that the app is smart, which helps with its two kinds of brushes: vector brushes and pixel brushes. A pixel brush is what you think it is. It lays down colors onto the virtual canvas, much like all painting apps.

A vector brush is different. The app records the size and direction of your stroke, and renders the brush stroke, but it remains “live,” so you can go back at any time and move the stroke, shorten it, enlarge it, or do anything else you’d like. This is how apps like Adobe’s Illustrator work. In Fresco, if you try to paint one kind of brush on top of another, it automatically creates a new layer. And about those brushes…

Having tried both Fresco and its main rival Procreate, I can say that the brushes in Fresco are impressive.

“If you haven’t seen the watercolors in Fresco in action, when you paint, the paint actually moves on the screen,” says Webster, Adobe’s senior design evangelist. “And that real wet media effects as the paint is blending, it stays wet at all times until you decide that it should be dry.” 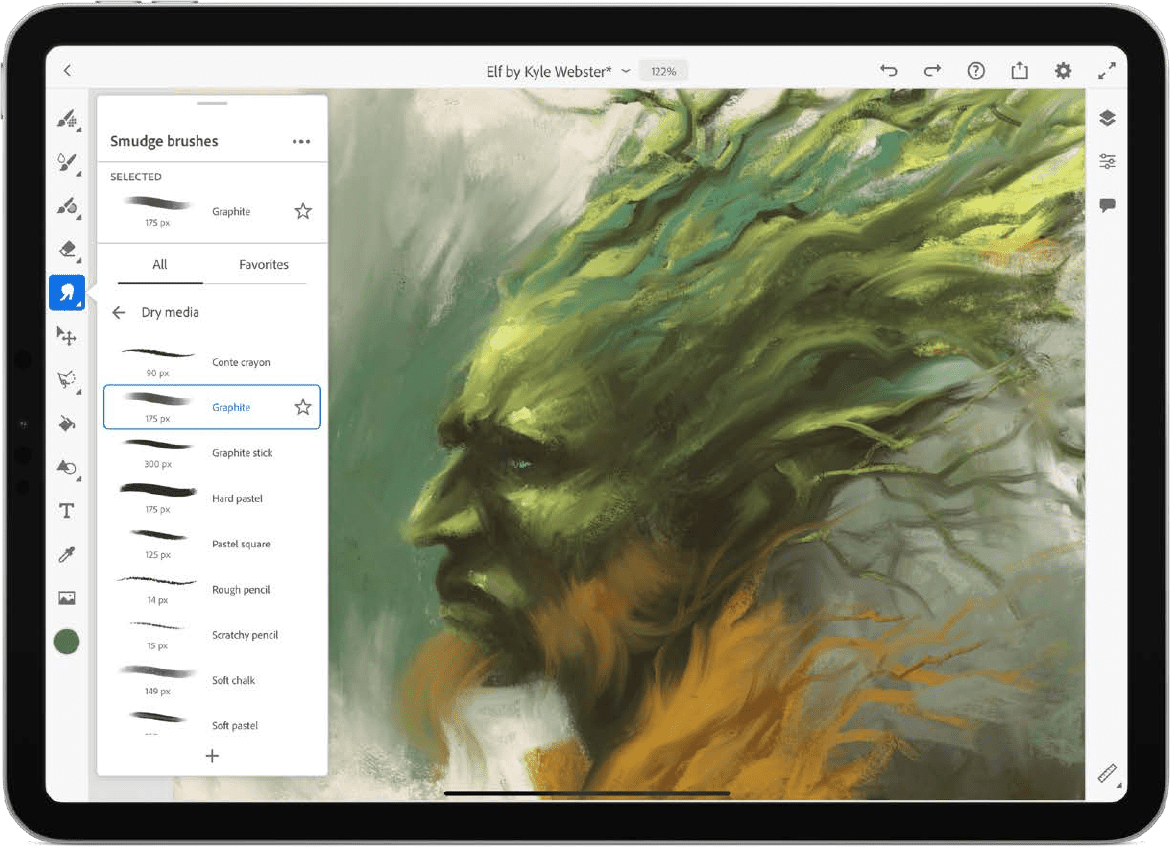 It’s a little odd seeing the paint continue to spread after laying it down, but if you’re used to watercolors then you’ll soon feel at home. You can also create brushes from your own photographs, and paint them onto the screen as textures.

“An example that I like to use is trees,” says Webster. “I took a photo of a tree in my front yard and I just photographed the bark. And now I can start painting with it. The tree bark is pressure sensitive. I can resize it up to a thousand pixels, and it’s a full RGB brush.”

In the end, painting is about feel. Fresco feels good, but perhaps Procreate feels better to you. The good news is that Fresco is free, so it’s easy to try out. It’s pretty neat having a whole painting kit in your pocket.